Friday the 28th of September Suckmusic will be back at Revolver for a big night of festivities. Label boss Nick Coleman will be back in the house alongside Suckmusic artists Doakes & Mount Mike.

Coleman, now based in Düsseldorf will be playing live followed by a 3 hour DJ set. His latest two track release out on Suckmusic – Electronic Love & German Winter (7th of Sept) has been rocking the local clubs & Open Airs over the European summer, with support from DJ T, Joris Voorn & Loco Dice.

We also launch Doakes’ new single ‘Militia’ scheduled for release 29th of September. Doakes’ sonic palette continues to evolve with each imprint he delivers. Militia is a big track, one that we expect will feature significantly at the upcoming Aus festival season.

As always thank you for your continued support of the label and our nights at Revolver. Catch you on the dance floor.

For our next release we welcome a young source of talent from the foothills of Mt Dandenong – Connor Mac. A fresh face on the label, Connor’s work is lush and melodic with a sweet spot for synthesisers. SUK063 or ‘Lost Kinship’ as he puts it is comprised of three tracks which showcase a distinct diversity to his taste. 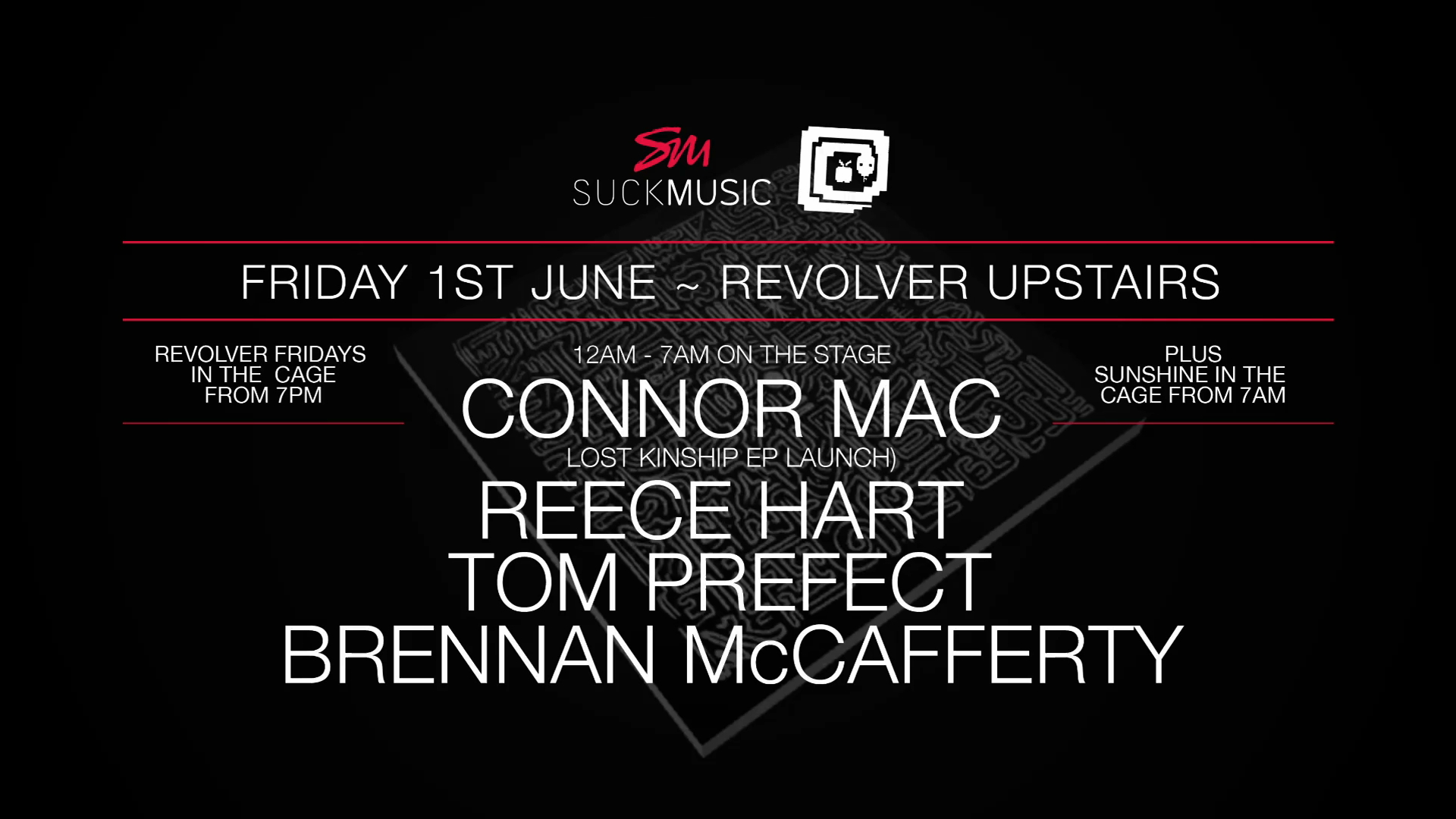 It’s been a little too long between drinks so we’re stoked to be back at Revolver Upstairs in June for another all in classico Suckmusic Friday night. This time we’re launching Connor Mac’s debut EP – Lost Kinship – and for those unfamiliar with Connor’s work, you’re in for a treat. Hailing from the hills of Belgrave, Connor’s take on house and techno is a fresh and well oxygenated approach with a sweet spot for synthesisers.

As per usual with our launch party events we’ll be live streaming the entire event from the cage on the stage and we’re also extending exclusive pre-release access to ‘Lose Kinship’’ for those who click attending. To receive a download link and be added to our free guest list (first 10 people only) PM us your name and email address.

Thank you for your continued support of the label and our nights at Revolver. Catch you on the dance floor.

With a fascination for music, dance, and rhythm from a young age, it took Mike a few years of stealing his mother’s crockery and wooden spoons and using them to make 4 to the floor dance floor tuna before he persuaded his parents to buy him a drum kit. He played his drum kit day and night, exploring all manner of eastern time signatures and Afro-beat grooves, absorbing sounds from wherever his dial up internet would allow. He began to compose little songets, and riffage, which he recorded in his bedroom using pre-historic software from the local library. Thus began his interest in computer music and audio production. His ears began to pine for the thumping kick drums he overheard on his sister’s Ministry of Sound Annual CD, and upon delving into what exactly made this enticing noise, he discovered Ableton Live. Now based in Melbourne, Mount Mike has been hard at work for a number of years honing his skills as a producer, and is ready to reveal what he has been working on. 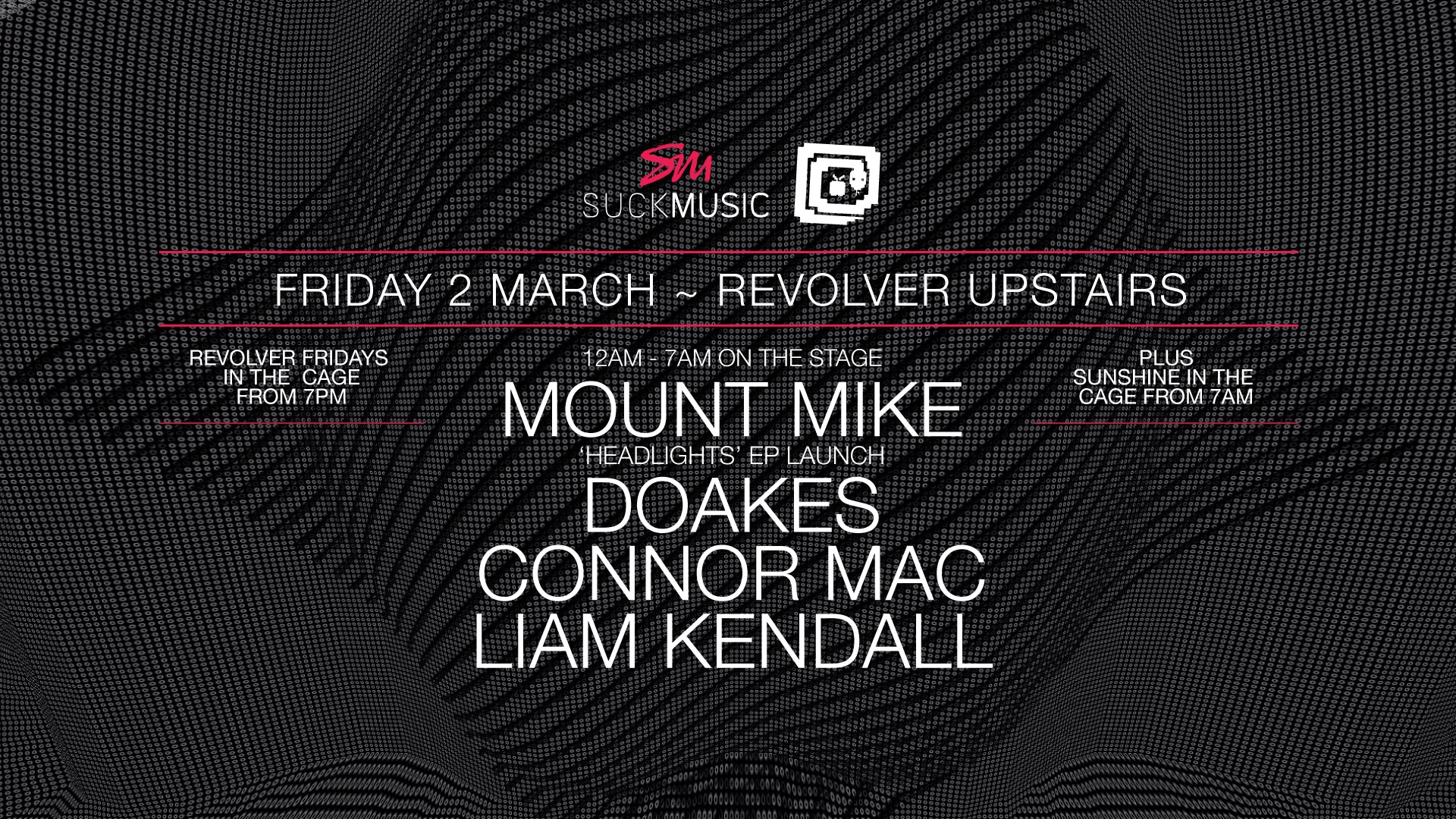 On Friday the 2nd of March Suckmusic will be back at Revolver for our first event of 2018. This next instalment features a couple of fresh faces on the lineup, most notably Mount Mike who’s debut EP – Headlights – we’ll be celebrating.

As per usual with our launch party events we are extending exclusive pre-release access to ‘Headlights’ for those who click attending. To receive a download link and be added to our free guest list (first 10 people only) PM us your name and email address.

Thank you for your continued support of the label and our nights at Revolver. Catch you on the dance floor.