DJ PP has been kind enough to send us his latest house mix all the way from Uruguay.
Checkout DJ PP’s latest remix of Silversix’s “Funky!”. The pre-release of “Funky!” can be purchased here: http://store.suckmusic.com/product/suk013-funky-silversix
Released through Suckmusic & Deported Music on December 17th.

We’re Deux are an electronic music duo consisting of Michael Douglas and Nick Villanti. Based in the outskirts of Melbourne, the pair entered the world of production through mixing disco and hip hop layering the sounds from different genres over each other on a basic DJ setup.

Drawing influence from diverse artists, ranging from Portishead to Booka Shade, the pair began producing electronic music in 2007. Whilst still finding and developing their sound, they were fortunate to have a number of releases on various labels in 2011.
The duo are currently trying their hand at making a variety of different styles while remaining true to the fundamental house vibe and are looking forward to releasing their debut EP on prominent Melbourne label Suckmusic.

Silversix’s second feature release for us this year reaffirms his love for horns, cowbells and everything “Funky!”.

Suckmusic would like to welcome our first international producer to the label. Uruguay’s main man DJ PP (Gabriel Rocha) jumps on board with a with a signature funk remix.

Australian heavyweight Chardy backs up with another Silversix remix and its a main room monster. This track is big, make sure you have replacement back up speakers!

Dotke (Dotan Tamir), Israeli born and raised, moved to Australia in 2007. Dotke’s love of house music started when he was 15 years old and sneaking to the underground clubs of Tel Aviv such as Allenby 58 and Comfort 13 to get closer to the sounds he knew he loved.

Dotke’s musical style has been influenced by the deep and sometimes emotional bass sounds of funk, soul and house music. His DJ sets let the audience not only hear, but feel and experience those deep bass and dark vocals .

Friday the 25th November, Lady Luck collaborated once again with one of the industries most recognised & favourite labels “Suckmusic“. Headliner Chardy belts out an electro house set for us. Prepare for his mainroom monster remix of Silversix’s “Funky!“. Coming out December 17th. 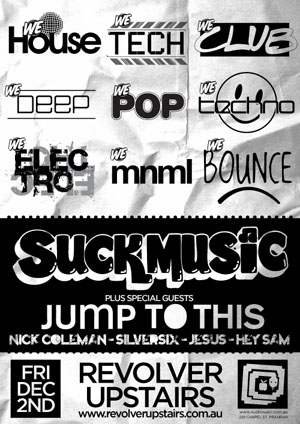 We would like to welcome fellow Melbourne record label “Jump To This” as our special guests.
DJ’s Hey Sam & Jesus will be playing along with Silversix & Nick Coleman refreshed and inspired from his month in the USA.

Suckmusic members will receive free entry as always, while discounted entry is still available for everyone else using the ‘Suckmusic‘ open list.

The back bar plays host to regulars Mike Callander & crew as per usual.

See you in the front bar xoxo.