Another season, another quality Jacob Malmo mix to bring on the vibe.
And as always he provides us with a track list, view it at SoundCloud.

Simón Agliati is a Melbourne based house and techno producer. His South American background and musical influences in particular salsa and afro Cuban styles fuel a passionate and vibrant sound.

It is obvious that Agliati appears to have discovered a sense of identity in his work. Each track invokes its own unique energy yet compliments and embodies the other tracks to present a whole. Not an easy feat to achieve for any artist.

We are proud to present Simón Agliati’s first EP, Work That.

In 2012, Midnite Sleaze have toured and headlined shows in the USA, Mexico, Indonesia and back home in Australia. They have also opened shows this year for Carl Cox, Roger Sanchez, Funkagenda, M.A.N.D.Y and played for the infamous club brand Circo Loco. Midnite Sleaze are also the head honchos of the infamous underground record label, Bamboo Music, which is in its 10th year. The mix features some very exclusive material soon to be released and some of the biggest artists of the year are featured.

Some fine original productions scattered throughout this 2 hour set from Simón Agliati. Another great night at Revolver Upstairs! Check out his new EP Work That available as a pre-release in our store & out on Beatport this weekend.

DJ Spacey Space recorded this set at one of Melbourne’s newest Saturday nights Cloud Nine. Fair to say the club was heaving! Enjoy. 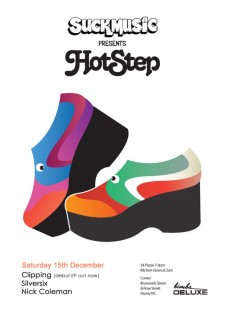 This month’s special guest is Clipping. His debut EP ‘Ok So’ is out now. GRAB IT HERE.
Be sure to get down early for a pizza and beverage before the dance floor takes off. 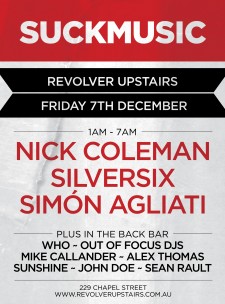 Party #15 at Revolver Upstairs is upon us this Friday from 1-7am.

This month Simón Agliati has his debut EP Work That coming out on the label. We look forward to hearing a long overdue DJ set from the talented house and techno producer.

Nick Coleman will be opening up from 1-3am, Simón Agliati 3-5am and Silversix 5-7am

Suckmusic at the door for cheap entry.

Clipping (Fabio Da Silva) is a DJ turned music producer, born in South Africa and now based in Melbourne, Australia. September last year he submitted a sublime mix cd to the website, followed a few months later by his first original production which came out on our In The Clubs series (VOL3). Ok So this is his debut EP.