Being influenced by ethnic music styles, Bongo stands out with his Brazilian percussion to uplifting house music, african steel drums to swinging tech-house and italian trumpet riffs to stunning afro-stabs. Bongo’s first EP immediately got picked up by the infamous “Sweat it Out” label (Yolanda Be Cool, Act Yo Age, Ajax, Solo, Vhyce,…) and has been released on the well known “Club Sweat” compilation in april 2011.

His remixes have been been blogged across the web and got air played on Annie Mac’s BBC1 radioshow. As a result of his first EP he gained support from the likes of “Yolanda Be Cool, Solo, Round Table Knights, Mercury, Mowgli, Renaissance Man and many more…”.
His second EP will once again see daylight on Sweat it Out by the end of 2011. To say the least, Bongo is redefining african-latin music in an art-nouveau style with his productions, remixes and sets.

Andrew Slattery is a resident and hosts Friday nights at the iconic Mink Bar in St Kilda. 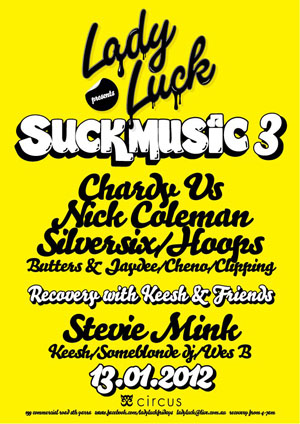 Yep, the 3rd addition to Lady Luck & Suckmusic is back with another quality line up.

As always, doors open at 10pm with drink specials flowing till midnight.

PROMO // Move Your Body – Northbrook [Sweat It Out!]

Our good friends at Sweat It Out! have just released Northbrook‘s debut single ‘Move Your Body‘. The single debuted into the ARIA Charts at #28 and is currently sitting at #20. Northbrook is Nick Coleman, Ryan Riback & Rachel Elberg.

Suckmusic artist Silversix jumps on board for a remix alongside Tommie Sunshine, fRew & Jeff Drake.
Be sure to checkout the video clip here:
http://www.youtube.com/watch?v=rMvCskVKhvU

You can grab the release from Beatport here:
http://www.beatport.com/release/move-your-body/851755

Swit is a New Zealand DJ producer currently based in Melbourne. His first release on Suckmusic ‘This Funk‘ was signed to our In The Clubs (Volume 2). This is his first DJ mix on the site and surely won’t be the last. Keep an eye out for more original releases and remixes from this talented producer. 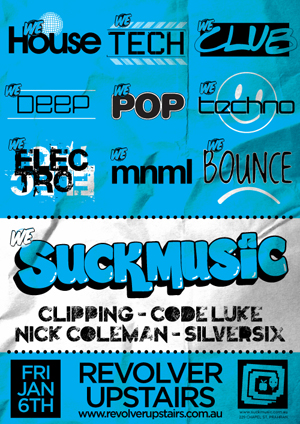 Our first club night for 2012! We will also be broadcasting live all the Suckmusic club nights at Revolver so our interstate and international followers can tune in.

Guest DJ’s kicking of the year are Clipping and Code Luke, along with Suckmusic residents Silversix & Nick Coleman.

Suckmusic members will receive free entry as always, while discounted entry is still available for everyone else using the ‘Suckmusic‘ open list.

The back bar plays host to regulars Mike Callander & crew as per usual.

In October Butters started running Lady Luck at Circus Fridays and has focused in on his own style of music and expressing his individuality & creativity behind the decks.