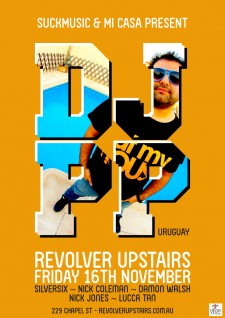 Uruguayan producer/DJ Gabriel Rocha aka DJ PP returns to the Revolver stage this November alongside Suckmusic’s Nick Coleman & Silversix and Mi Casa’s Damon Walsh, Nick Jones & Lucca Tan. PP has had an incredible couple of years since we last saw him, being nominated as best producer in the Beatport Tech House Music Awards with ‘Drunken Russian’ in 2011 & topping sales and DJ charts worldwide with ‘La Luna’ this year, all while keeping up one of the most prolific release calendars we’ve ever seen.
His collaborated with Suckmusic’s Silversix on their track F*cking Amazing! which went down a treat on CR2 Records earlier this year & with their follow up project House That out now through Hotfingers, we couldn’t pass up a chance to get the crew together again & throw a little party.